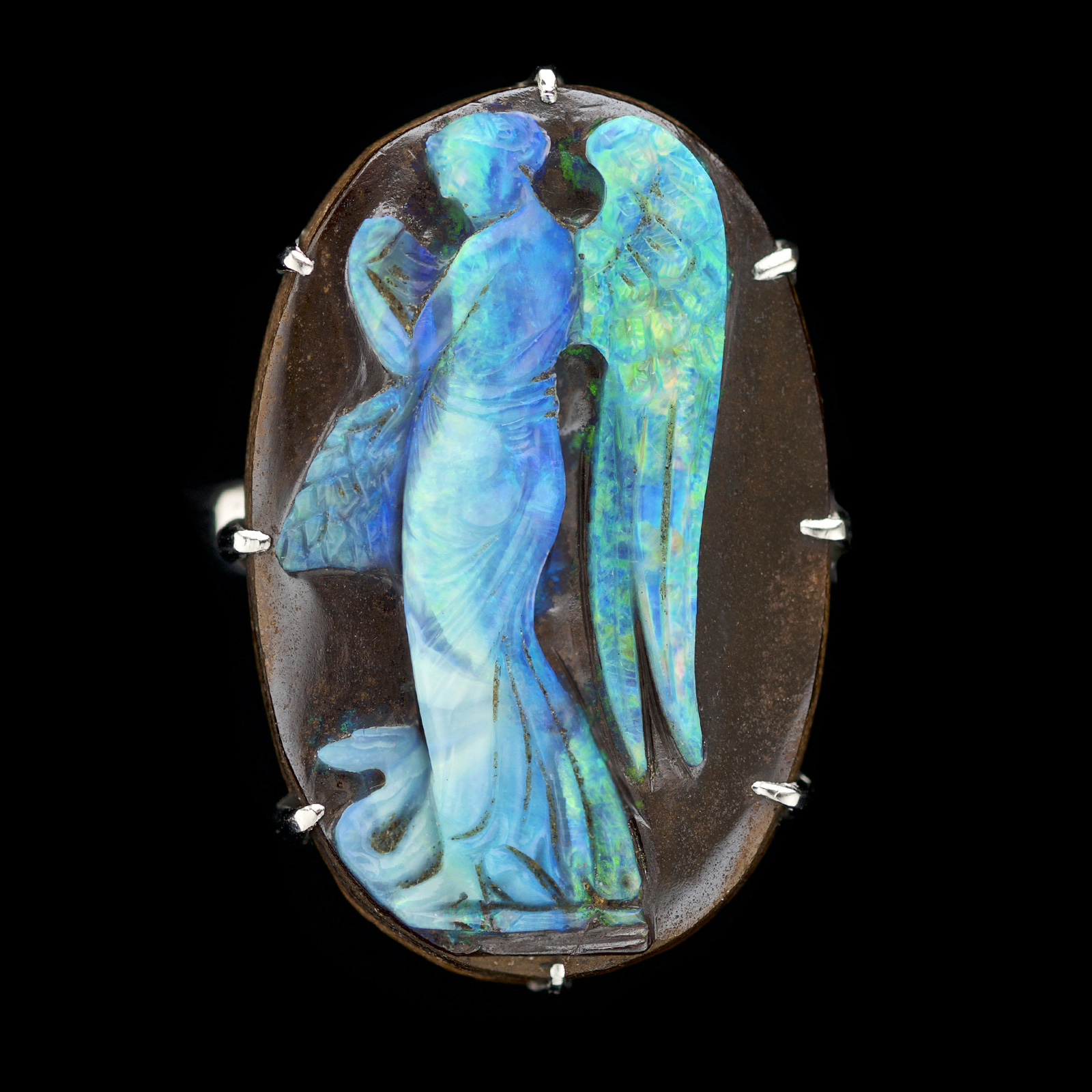 Above: European opal, carved as a cameo, attributed to Wilhelm Schmidt, c. 1880. ?? cm.
Photograph courtesy of the author.

I recently acquired a striking opal cameo set in silver as a ring. Depicting Nike, the goddess of Victory in Greek mythology, it has been attributed to the celebrated German gem carver Wilhelm Schmidt (1845-1938) and dated circa 1880. Schmidt claimed he had invented the technique of carving opals and was particularly known for his opal cameos.

Although I was aware that opals were first discovered among relics in a cave in Ethiopia and were also known in Roman times (their name stems from a Sanskrit word for jewel), many people believe the opal to be a uniquely Australian gemstone and in 1993 it was proclaimed Australia’s National Gemstone by the then Governor General The Hon Bill Hayden A.C. After all, Australia now produces some ninety-five per cent of the world supply. First discovered in 1849 at White Cliffs in New South Wales, it is now mined all over the country, with notable fields in Andamooka and Coober Pedy in South Australia, at Boulder in Queensland and, perhaps the best known, Lightning Ridge in northwestern New South Wales, famous for the dramatic black opal, ablaze with a rainbow of colour.

But Europe had something of a head start in opal production. Commercial mines operated in Cervenica-Dubnik in Hungary, now Slovakia, for centuries and most of the opals used in antique jewellery, including the wonderful ones used so cleverly in Lalique’s jewels, were found there, but from the beginning of the 20th century competition from the Australian stones was too stiff and the European mines are no longer in operation. [Members may remember Peter Semrád’s lively lecture on the subject delivered to the Society in March 2019 – Ed.] Although there were random finds of opal in Australia in the late 19th century it was not until 1905 that commercial production began in Lightening Ridge northwestern NSW and only in 1930 in South Australia at Cooper Pedy and Andamooka. The white opal is found in South Australia, the boulder opal in Queensland and the most valuable black opal in Lightening Ridge. In a sale at Bonhams, Los Angeles, May 23, 2017 a large black opal of 40.47carats fetched US$87,244.

The Australian Aborigines believe that opals were born in the Dreamtime – when their ancestral being came to earth via a rainbow. When the rainbow connected with the land, great rocks and pebbles were formed that glittered in the sun and produced opals. Europeans, on the other hand, have come to think of these beautiful gems as unlucky for the wearer. The superstition that opals are bringers of bad luck arguably derives from an historical novel, Anne of Geierstein by Walter Scott (1771-1832) the most popular novelist of the early 19th century. Anne’s grandmother, Lady Hermione, is a magical creature who wears an opal in her hair which sparkles and flashes to reflect her emotions. When a drop of holy water falls on the stone during her daughter’s christening, the colour drains immediately from the gem, while Hermione collapses and later dies. After the publication of the novel in 1829, sales of opals plummeted by fifty per cent and were not revived until Queen Victoria began to favour them and, given the extraordinary length of her reign, clearly survived the supposed curse!

On her first visit to Australia in 1954, Queen Victoria’s great, great granddaughter, Queen Elizabeth II, was presented with the ‘Andamooka Opal’, a splendid stone of two hundred and three carats, set in a diamond necklace. A gift from the people of South Australia, it was seen for the first (and last!) time at an evening concert on Adelaide Oval. Perhaps Her Majesty was somewhat daunted by the sheer size of the stone, roughly that of the saucer of a demi-tasse coffee cup.

Anne Schofield opened the first specialist antique jewellery store in Sydney in 1970. She regularly lectures on antique jewellery and costume and her publications include the seminal guide Australian Jewellery – 19th and Early 20th Century (with Kevin Fahy, Sydney: 1990), as well as contributions to JHT. Anne is a valuer for the Australian Government’s Cultural Gifts Scheme and is a Life Fellow and Honorary Associate of the Powerhouse Museum, Sydney. In 2003 she was appointed a Member of the General Division of the Order of Australia for her services to the decorative arts, particularly antiques.