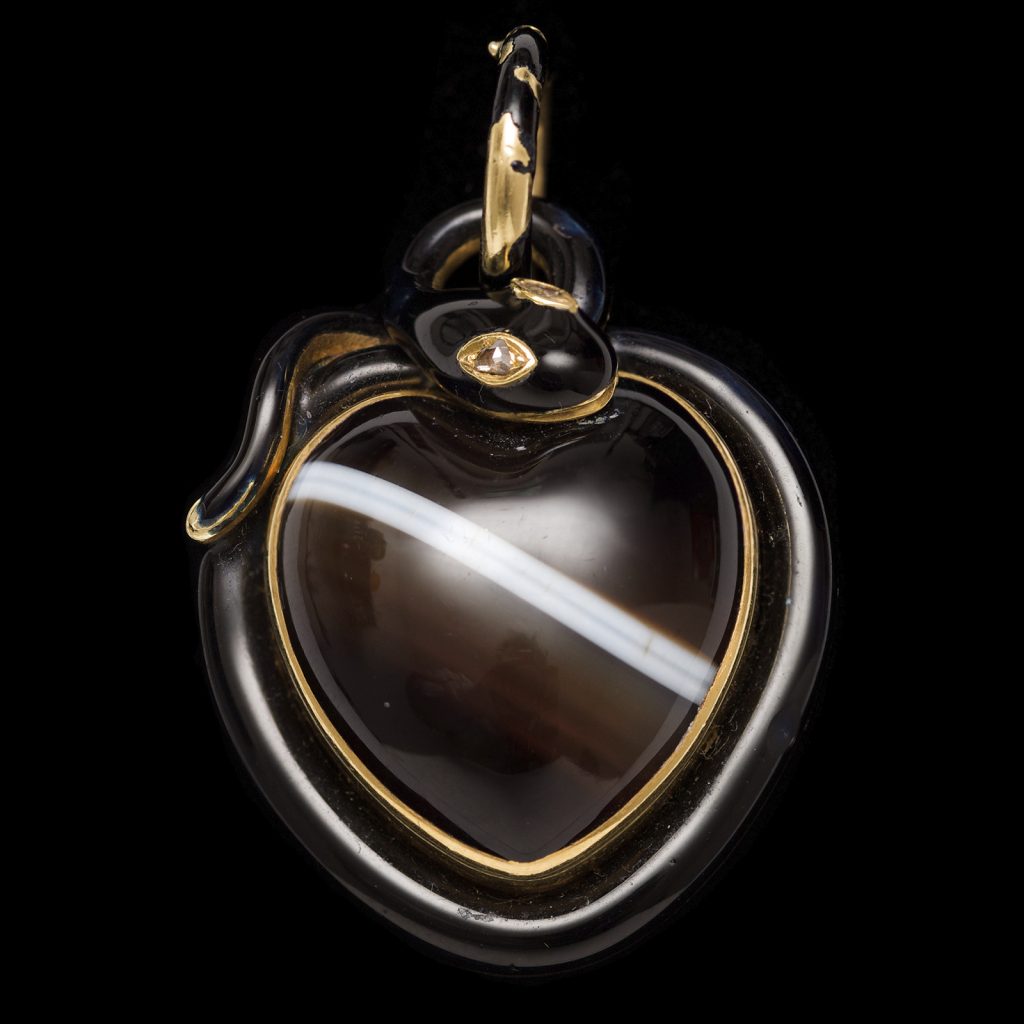 The 20th century Irish born artist Francis Bacon had a very simple view of mortality; “You live, you die. That’s it,”

This may be seen as a very bleak view of one of life’s inevitabilities, but in past centuries, before the development of medical science, death was omnipresent. Whole populations could die off in a single swift epidemic. Childbirth, a small cut on a finger, a simple cold and a myriad of other afflictions took the young and old alike well before their allotted life span.

Elaborate mourning rituals were devised to ease the pain of loss. These were ceremonial events and the grander the person commemorated, the more elaborate the obsequies. Simpler folk had other more personal ways of remembering the dead, chief among which was the wearing of black garments and “mourning jewellery”, bearing dates of the birth and death of the departed and sometimes a lock of hair.The wearing of this memento mori jewellery became widespread in the latter part of the 18th century and reached its apogee during the Victorian era in England.

Mourning jewels in the late 18th early 19th century were usually rings and pendants with miniature portraits painted in enamel or ivory and mounted under rock crystal, such as a’ Gold and enamel Coffin shaped ring, the central locket with a drawing of a skeleton under crystal, the band engraved M. Kennet ob. 13 Jan 1725’ Neo-classical designs appear with memorial sculpture, urns, weeping willows and weeping ladies. I once owned a splendid pendant with a miniature of a woman leaning against a tombstone with a scroll bearing the message -“With mutual love our hearts did burn and now my tears bedews (sic) his urn”

By the 1830s the sombre neo-classical designs gave way to softer more romantic designs with forget-me-knots being the favourite floral motif. But this Romanticism wasn’t long lived. The ritual of mourning achieved cult status during the Victorian era from 1837-1901 and after the death of Prince Albert in 1861 it became even more intense.

Perhaps the most unusual and perhaps bizarre type of mourning jewellery was that made from human hair.

At the 1851 Crystal Palace Great Exhibition there was great excitement over an exhibit of ‘Jewellery made from Human Hair’ exhibited by Hansen & Konig of 440 Soho Bazaar Artists, London.This was one of the specialist businesses employing craftspeople working with supreme skill. Spectators at the Exhibition were impressed not only by its beauty, but by the incredible ingenuity in its manufacture, for example – a buckle ring and a locket ring set with concealed hair, c 1850

If you were skilled at handiwork you could try it yourself, having studied one of the publications such as ‘Hairwork’ in The Ladies Companion Vol 2 June-Dec 1850 or ‘The Jewellers Book of Patterns in Hairwork’ by William Halford and Charles Young, published in London in 1864

Some people find it macabre and spooky but I believe that it was the most personal and evocative item that could be a lifelong memento of the loved one – worn on the body, close to the heart. It is important to remember that before the mid 19th century there were no photographic images to remind people of the dear departed family member, relative or friend.The miracle of photography had started in 1839 with the appearance of daguerrotypes . Images could be produced on a polished copper plate coated with silver but this required sittings of 60-90 seconds, and by 1851 the daguerreotype had been replaced by a photographic process which became more and more sophisticated, eventually leading to the digital photography which we use today. When we look at all the different types of jewellery of the mid 19th century, certainly the most popular jewel was the locket, sometimes enclosing a miniature portrait or lock of hair and later a photograph.The ledgers of Garrards London show a continual flurry of orders for gold lockets for photo miniatures after the death of Prince Albert on 14 December 1861.

‘Ornaments will be jet’ was the decree on the death of George IV in 1830.

Jet is an organic gemstone derived over 186 million years from fossilised wood which had decayed under extreme pressure. It is found along a two-mile stretch of the Whitby coastline in Yorkshire. It is hard and dense but soft enough to carve and polish into beads, necklaces, chains, brooches, bracelets and earrings, even cameos, so it quickly became a popular material for mourning jewellery, and after the death of Prince Albert, jet became the Queen’s favourite material for her jewellery.

Whitby Jet jewellery had been exhibited at the 1851 Crystal Palace Exhibition and had created great interest. In the following decades, the jet industry received a tremendous boost and by 1871 there were 1,000 jet workers employed in Whitby. The Art Journal singled out for praise Thomas Andrew of Whitby who supplied Queen Victoria, and Isaac Greenburg, who supplied bracelets to the Empress Eugenie. The Queen magazine reported in 1870 “ jet jewellery is much in vogue this season,” and examples included carved jet earrings and jet necklaces with pendant drops.

There were alternatives to jet, including French jet, (glass from Bohemia fused onto metal plates) Irish bog oak. gutta percha (a by- product of rubber) and banded agate, which was beautifully cut by gem engravers in Ider-Oberstein Germany. A fine example is a Banded agate heart locket, encircled by a snake swallowing its tail – the ouroburos, symbol of eternity -engraved on the reverse G.C.E. ‘April 15 1859

However, during the latter part of the 19th century there was a reaction, led by John Ruskin and William Morris, against prevailing conservative fashions in design, including costume and jewellery. Fresh new ideas resulted in the Arts and Crafts Movement in England and Art Nouveau in France. Mourning rituals became gradually less important to the general public although the Queen maintained the tradition to her death in 1901.